It seems to be happening far to often the head contractor or project manager on a project collapses and leaves one big mess left for others to clean up. Again, we have been engaged as a preferred insurance builder to take over from where one builder has packed up and left the site of this house renovation with a pile of defects 33 pages long to be exact. The property is in the Adelaide Hills of South Australia and the builder has gone into administration leaving the property owner with the problem to deal with.

What are the issues we have been left to deal with?

Majority of the problems on this project are relating to water entering the building through poor external finishes which have then led to internal issues (a snowball affect).

Most likely the biggest cause and biggest expense to have fixed. The style of roof used at this property is Skillion. There have been 2 box gutters constructed and both are of poor finishes. The box gutters have inadequate falls and the metal roof sheets which lead into them have been cut short (40mm short a large amount, considering they should have a 50mm overlap into the box gutter so overall 90mm short). The result of this is that water is not flowing away fast enough and secondly it is not entering the box gutter all the time and making its way into the gyprock ceiling causing internal damage to ceiling but now also the bamboo floating floors.

Down Pipes And Rain Head

The down pipes have not been constructed to the correct sizes and the same with the rain heads. All these issues add to the lack of ability to have the water removed from the roof quick enough once again allowing the box gutter to fill up and overflow into the ceiling inside the house.

The property has had new windows installed and around majority of these windows the final flashings have not been installed. Along with the window’s other penetrations etc have not been sealed correctly or not at all. Once again, all these items are allowing any water which might meet these fixtures to penetrate and further cause water damage inside to items such as carpets and gyprock wall linings. 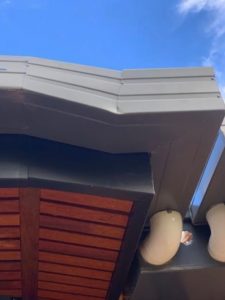 As previously mentioned above items such as the gyprock, carpet and bamboo flooring have all been damaged and will all now need either repairing or removal and reinstallation.

After thorough investigations and identification of the problems it is certainly a positive step forward; now finding the best way to fix the issues while causing minimal disruptions especially heading into winter. The most important job which is also the largest is having the roofing sheets removed along with the box gutter in order to have all this reinstated properly and making most of the building watertight to firstly avoid further damage and allow for internal progress to take place.