It is something that can be over looked either during the design phase or construction process and even after many years of building being in operation the thermal protection may need maintenance. Today many designers and engineers are across the many available options on the market but like everything it comes down to price, BUT with the wrong product or no thermal protection the longer-term costs will almost be guaranteed to out way the initial costs back in the building process.

What areas of a building does thermal insulation impact?

Thermal insulation comes in many different forms and provides the same service to each area it is applied to. The design is to assist with lower energy bills through maintaining steady/constant temperatures to the material it is associated with. An example is the older properties we renovate in Adelaide such as Unley and Myrtle Bank have no insulation on the underside of the sheet iron allowing for a variety issues such as noise and excessive amounts of temperature differentials in the roof space to occur.

We recently under took an energy audit of a block of 50 apartments in the suburb of Plympton in South Australia. There were various suggestions put forward to assist with energy conservation such as sensor activated lighting, roof ventilation to help hot air be expelled during summer, decrease draft entering under doorways, double glazing of glass, water saving shower heads, thicker curtains and solar electric panels on the roof for electricity. One of the main issues which has been immediately dealt with was the thermal protection to a large commercial scale water heating plant.

Approximately 10 years ago a contractor was engaged to upgrade some of the infrastructure which provides huge amounts of hot water to the large volume of showers and baths at this facility. The installation was very poor and as you will see in the photos below majority of the pipe work which carries hot water into and around this apartment complex was missing or barely had any thermal protection. What this meant is that you have copper tube carrying 65 degrees of water exposed to elements allowing for a huge temperature drop. In turn the water heaters were working a lot harder then needed and the client’s energy bills were through the roof.

A process such as the one described above was labour intensive, but even by the time we had completed only a third of the new pipe work insulation the increased temperature being kept inside of the pipes could be felt as we installed the insulation, the pipes were becoming warmer and even to a point towards the end of the process where they were hard to handle because the temperature of the water was being maintained to higher level. This entire process took a total of two full days and two staff members. 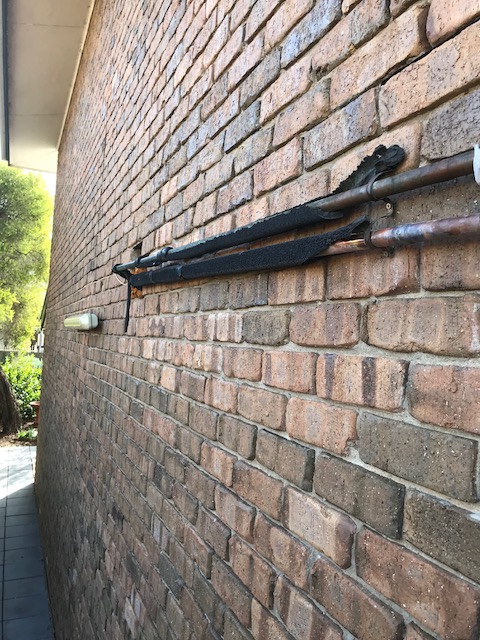 With the continual rising of energy bills it has become increasingly harder for businesses to maintain the running costs while still trying to remain competitive in the market place. It is crucial that every part of the business is operating in an energy efficient manner. Sometimes businesses need to spend a bit of money to create a better environment in which they can start to save money. Today there are still state government incentives and rebates on offer for certain energy saving methods which not only gives the owner a money credit but the appliance being installed will immediately start to impact on the lowering of utility bills. If you are considering trying to decrease your utility bills contact us today and let us perform an energy audit on your property.